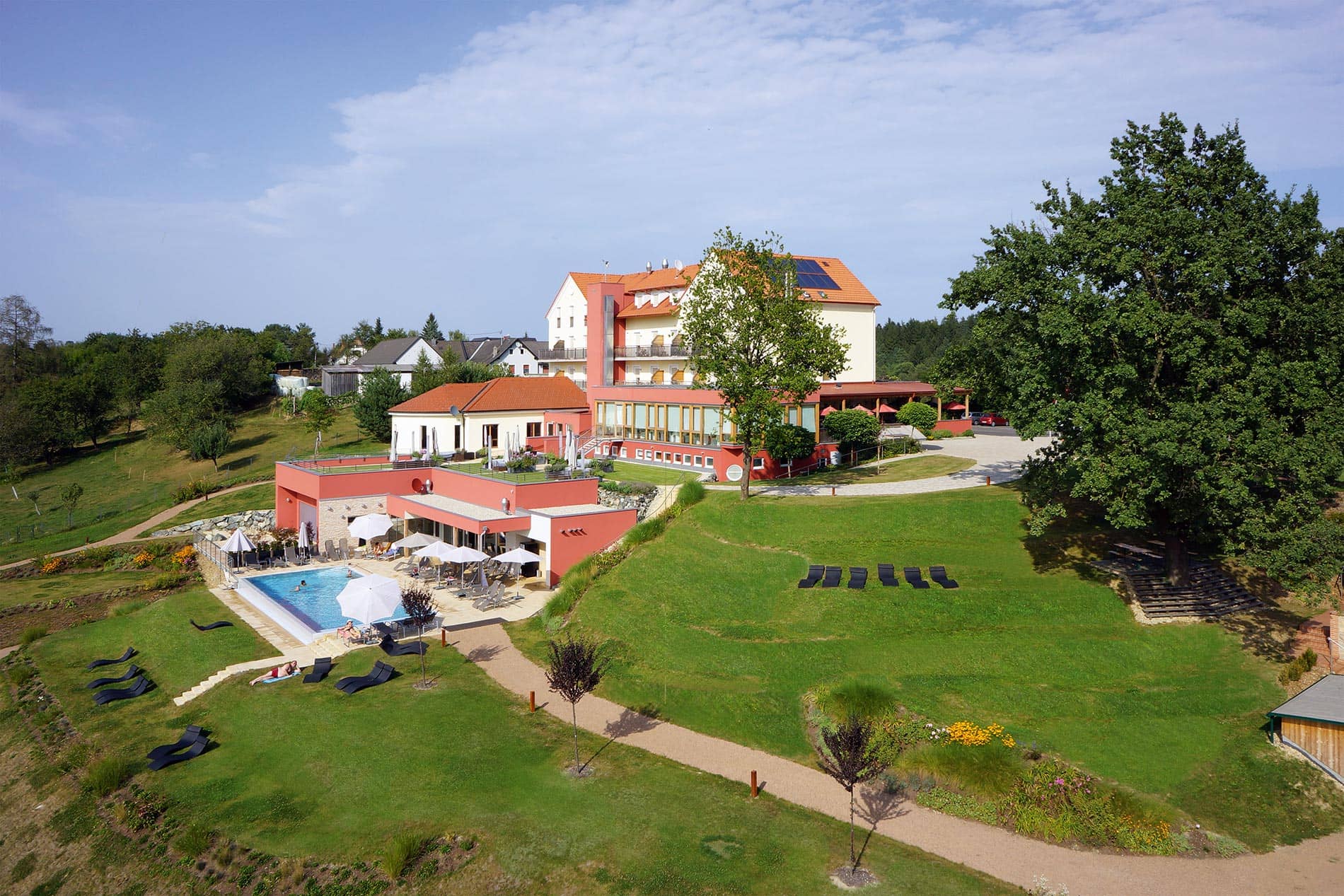 From old guesthouse Martinihof to a modern Hotel DAS EISENBERG

The old pilgrim guesthouse, Martinihof (Saint Martin guesthouse) in Eisenberg was only 450m away from the place of apparition. Upon the explicit wish of the Blessed Mother of God the pilgrim guesthouse was built during the years 1972 to 1973 by the Lawn Cross Pilgrim Association (RKPV). Truly enough, Heaven provided for the financing of this large building. The inauguration took place at Easter in the year of 1973.

In 2007, the new Hotel DAS EISENBERG was opened on the site of the ancient pilgrimage home. The **** Hotel provides plenty of space for individual pilgrims and groups. Open daily, the panoramic restaurant in DAS EISENBERG was stylish with wood and tastefully decorated.

Eisenberg is situated in the southeast of Austria, embedded in a rich forestry and quiet hilly landscaped area, close to where three countries, Austria, Hungary and Slovenia border on one another.

The place of pilgrimage lies on a mountain range and belongs to the municipal marketing village of St. Martin on the Raab, in the district of Jennersdorf, the whole area of which is known as the southern Burgenland. The enclosure of the Holy Lawn Cross, the Fatima and Padre Pio chapels, as well as the house and the grounds of the Lex family are situated along the road towards the forest to where the three borders meet. The place of pilgrimage is not far from the once Soviet-Communist border power line, commonly known under the name, “iron curtain”. A map shows you the geographical situation.

The municipal marketing village, Saint Martin on the Raab lies in the south eastern corner of Burgenland in thedistrict of Jennersdorfembedded in a rich forestry and quiet hilly landscaped area, close to where three countries Austria, Hungary and Slovenia border on one another . The scenic countryside is influenced by the river Raab which reaches into the northern outlet of the Austrian hill country. The whole region consists of six local areas, covers 4,300 hectares and has a population of 2,189. The state office of the Burgenland Federal State Government gave the right of municipality to conduct “market municipality” as of 1st September 1979. The market municipal area lies with its entire region in the nature park Raab, which was founded on 16th December 1997.

The old and venerable Church of St. Martin is situated in a hilly area and can plainly be seen on a plateau of one of the hilltops. Even in the valley of Raabtal the church catches one’s eye.

The first consecrated church to St. Martin in the locality was built around the year 1300 A.D. Today’s Baroque church originates from the first half of the 18th century. It is the landmark of the entire Raabtal area and grants a wonderful view over the Raabtal valley, right up to the Riegersburg and to the Grazer Schöckel. This church is closely connected with the apparitions of Eisenberg. In Eisenberg there are three chapels, a house chapel where there is a large statue of Our Lady of Fatima and right next to it a St. Padre Pio chapel near to where the Holy Lawn Cross is. In addition, in the nearby pilgrim guesthouse, Martinhof there is yet another beautiful chapel worthwhile visiting, which is dedicated to the Swiss patron saint, Brother Klaus.
Cookies erleichtern die Bereitstellung unseres Angebots. Mit der Nutzung unserer Seite erklären Sie sich damit einverstanden, dass wir Cookies verwenden.OkMehr Informationen